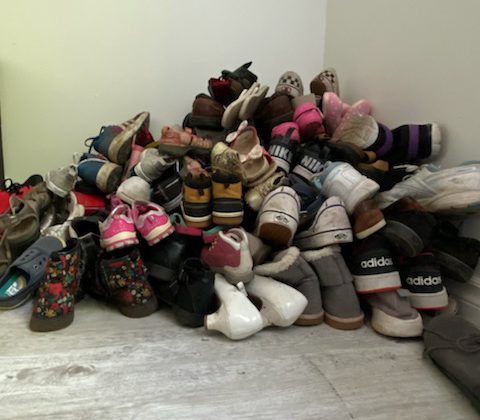 In the days since the graves of 215 Indigenous children were uncovered on the property of a former residential school in Kamloops, B.C. many have set out to honour the lives lost, including a Gravenhurst resident.

Within minutes of posting a request on Facebook for people to donate unused shoes, AJ Pirhonen, a Moose FM on-air announcer, was flooded with people happy to help her build a memorial to honour the lives lost. “It also represents all of the children and lives lost that we don’t know about yet,” she explains.

In only two days, 89 shoes and counting have been collected. If you want to donate, you can drop shoes – of any size – off at 325 Hughson Street in Gravenhurst.

The Muskoka Wharf in Gravenhurst has been floated as a potential site for the memorial, but it hasn’t been confirmed yet. Pirhonen says the idea was put forward by the Muskoka Area Indigenous Leadership Table because of the Indigenous exhibit that is being created there.

“I think it’s super important that people start to learn about what we’ve done to the Indigenous populations,” Pirhonen says. Residential schools were created in 1884 with the last one in Punnichy, Saskatchewan closing on New Year’s Day 1996. It was 12 years after that the Truth and Reconciliation Commission of Canada was established to document what happened at the schools to educate Canadians. Prime Ministers Stephen Harper and Justin Trudeau both issued apologies during their terms.

“Lots of people don’t know about it,” Pirhonen says about the schools. “We weren’t taught about residential schools when we were in school.”

She adds that it’s not anyone’s fault for being ignorant about what happened, but now we have a chance to educate ourselves. Pirhonen says it doesn’t have to be something big like creating a memorial, it could be as simple as posting something on social media, or just listening to the stories Indigenous peoples are sharing. “There are so many people that are trying to share these stories, and we’re not listening,” she goes on to say, pointing specifically to the late Gord Downie’s “The Secret Path.” The album was turned into a documentary based on the story of a young Anishinaabe boy from the Marten Falls First Nation who died in 1966 while trying to return home after escaping from a residential school.

Her interest in Indigenous issues stems from being raised in Prince George, B.C. which has a high Indigenous population. According to the 2016 Census, 14.5-percent of its 85,000 residents identify as Indigenous. “I got to see first hand a lot of the poverty and the addiction and the struggles they are faced with systematically,” Pirhonen says. “It really opened my eyes to how much of a problem this is.”