Muskoka paramedics proud to have spotlight shone on them 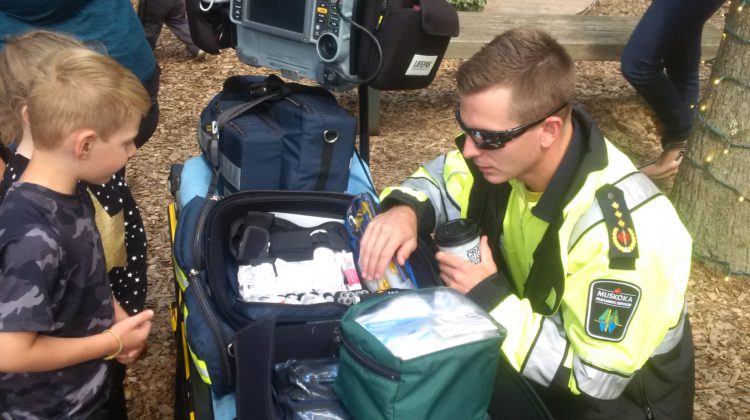 “To take a week to acknowledge the work paramedics have done and stepped out of their traditional roles is very meaningful to all of us,” Chief of Paramedic Services and Emergency Planning for the District of Muskoka Jeff McWilliams tells the MyMuskokaNow.com newsroom.

He says usually paramedics don’t like the attention. For them, it’s about responding to calls and getting patients the care they need as quickly as possible.

“Sometimes it is hard to find words or to know how to adequately describe the feeling of knowing that as paramedics we’ve helped someone through one of their most terrible horrific days,” Paramedic Myles Leonard says.

He was inspired to become a paramedic thanks to his mom, who works at the Royal Victoria Regional Health Centre in Barrie. “I’ve always loved and admired that her job allowed her to help and care for people,” Leonard says. He was also passionate about health sciences in high school, so you would think becoming a paramedic was an obvious choice, but that wasn’t the case. “I knew I wanted to help people and I knew that I enjoyed some of the health sciences,” he says, adding that it wasn’t until a few weeks before the deadline to submit post-secondary school applications that he decided he wanted to be a paramedic. Leonard credits his school’s guidance counsellor with helping set him on the right track. He remembers kicking himself for not thinking of that earlier.

“My mom has always been a big supporter of mine,” Leonard says. Even nine years into his career, he still reaches out to her for medical advice. He says that his work as a paramedic has helped strengthen the bond he has with her.

Paramedic Travis Larade’s uncles were the ones that inspired him to become a paramedic. The two were volunteer firefighters and he says he remembers spending the day with them at the fire hall. “They were my heroes,” he says. As he grew up, he looked into following in their footsteps and becoming a firefighter as well as becoming a police officer, but he quickly realized being a paramedic is the perfect job for him.

McWilliam says it’s important to remember how tight all the emergency service departments are. The police, firefighters, paramedic and dispatchers all need to be on the same page when they’re responding to a call.

Drummond says there are plenty of positive moments when on the job, but there’s also a lot of tough ones. Day after day, it’s his two-year-old son that drives him to go to work. “He’s definitely changed my perspective and definitely my fiance’s perspective,” he says. “Loving and supporting them is the most important thing.”

The past year has also helped change how mental health is looked at, according to Larade. “We’re more willing to talk about things,” he says about himself and his co-workers. He credits the higher-ups for making it easier to do that and for putting things in place to make sure everyone is taken care of mentally and physically.

He has an interesting perspective since he started out as a part-time paramedic before being promoted to full-time. “As a part-timer, you have to find your way into the career and you have to earn the trust and respect of everyone around you,” he explains. Once you get the full-time position, you’re stationed at one base and are able to get to know your colleagues better. He says that’s vital to being able to do their job since it requires a high level of trust between you and your partner.

Drummond says he likes to take the time to reflect once he returns from a call and fills out the paperwork. He adds that he tries to give himself credit for a job well done, knowing that he did the best he could. He echoes what Larade said, adding that he finds coworkers now pay more attention to how their coworkers are doing and check in often.

Larade says sometimes it’s a challenge to keep his head up. He tries to find things outside of the job to do to keep him from getting too stressed out, whether that’s working out, talking with his family or going for a hike. He says the community plays a part in giving him a boost as well. “Sometimes just a thank you after a call that you get, or weeks after getting a card, or someone just calling into the station wanting to thank you for a job well done,” he says.