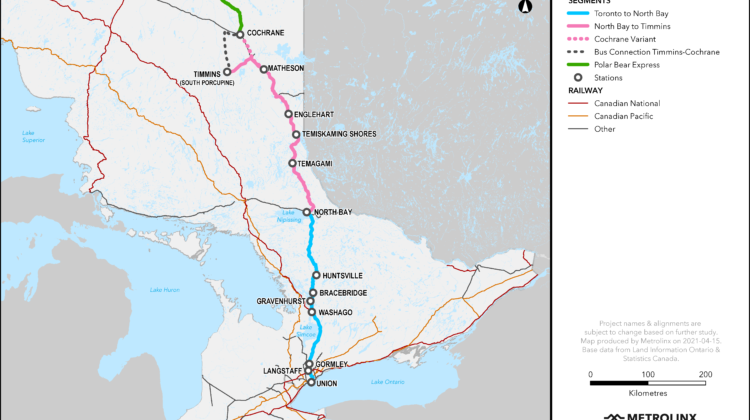 A map of the proposed route for northeast passenger rail (Photo credit: Ministry of Transportation)

The mid-2020s is the target for resuming northern passenger rail service.

Minister of Transportation Caroline Mulroney announced the next stage of planning will focus on the proposed service route.

Five million dollars is coming from the 2021 provincial budget for this phase of planning, with a target completion next year.

In terms of the mid-2020s target for the resumption of service, Mulroney says she knows people in the north are eager to see the return of passenger rail which is why they’re working hard to deliver that. She says they take safety very seriously, citing a track audit and review of infrastructure that’s in place. “We ran a train recently to test that infrastructure, but we also want to take the time to consult with people across Northern Ontario, but especially in the Northeast, about when the service comes back, what kind of service would they like to see,” she says.

Ontario Northland President and CEO Corina Moore says they will be partnering with Metrolinx to dive into the proposed service route. She adds they’ve conducted a review of their track, but there’s more work to be done. “We’ll be working with Metrolinx to complete the study with CN on that rail line, which is important because it has been providing rail freight service, but rail passenger is obviously different and usually run at a faster speed,” she says.

There’s also work to do around station locations, consulting with communities on meeting their needs and integrating ONTC bus service with rail.

Passenger rail service between Cochrane and Toronto was cancelled in 2012.