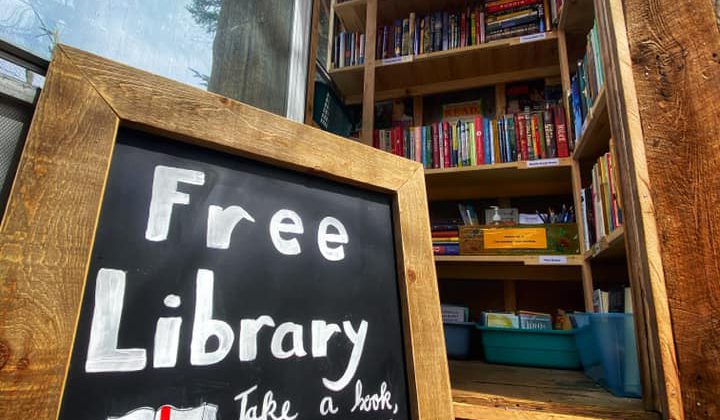 A former bus shelter has been repurposed and opened as a library in Huntsville, but its origin story dates back nearly three decades.

Andrea Gillespie and her husband Tom Berry are lifelong educators with Andrea spending a few years with the Ministry of Education before retiring two years ago. “We were looking for a project that could be focused on reading,” Gillespie explains, joking that it was born because of the COVID-19 pandemic. She and her husband were spending so much time together, every so often they would need to take a break and read a book or two. Gillespie adds that her friends have been telling her, “I don’t want to watch one more Netflix show.”

When they were thinking about what they could do, Gillespie and Berry realized what they needed to get the project started was sitting right under their nose or, to be exact, at the end of their driveway. Almost three decades ago, they created a bus shelter for their daughter. Berry explains when they moved onto their property in Huntsville there were two dying trees in the backyard. The lumber they got from cutting it down was used to create that shelter. The shelter was later named “Steve” by their daughter, who Gillespie says loved to give inanimate objects names when she was younger. “She had a very rich imagination,” she says.

In the years since their daughter moved out, the shelter has been gathering dust at the end of their driveway. “I think a lot of empty nesters will find themselves in the same situation and that is years after their child has moved on they’re still finishing some of the things they had preferred to complete when they were still under the roof,” Berry jokes.

Gillespie says during her time as an educator, she always liked doing “big projects” based on reading. When the two found out about Little Free Library, it felt like a natural fit.

The Little Free Library program started in Hudson, Wisconsin in 2009 and has since grown to have over 100,000 registered libraries in over 100 countries. It was a tribute to his mother; she was a teacher who loved to read,” a biography on the program’s founder Todd Bol reads. “He filled it with books and put it on a post in his front yard. His neighbours and friends loved it, so he built several more and gave them away.”

Gillespie says people have been “incredibly generous” since the library opened with her estimating 15 boxes worth of books have been dropped off so far.

“Steve” sits at the end of Gillespie and Berry’s driveway at 2835 Muskoka District Road 10, just off of Brunel Road in Huntsville.