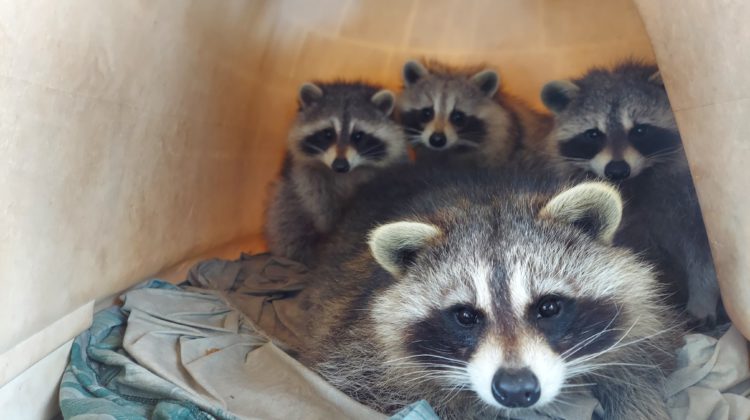 Now that spring has sprung, the Aspen Valley Wildlife Sanctuary says it’s likely we will start to see our homes and cottages hosting various wildlife, including raccoons.

“The species that we get the most calls about this time of year is the raccoon,” Director of Animal Welfare for the sanctuary Janalene Kingshott tells the MyMuskokaNow.com newsroom. “In a single season, Aspen Valley Wildlife Sanctuary can take in as many as 200 raccoon babies.”

“This time of year a lot of people are coming across raccoons that are in their attics or in their sheds,” Kingshott says. The babies are sometimes orphaned due to homeowners trapping and removing nursing moms, not realizing that they had children. “This creates an even bigger problem,” she says. “Encouraging raccoons to move on their own is a much more humane way of handling these unwanted houseguests.”

According to Kingshott, if you use a standard trap on them, you could end up unintentionally harming the raccoon.

A better way to get rid of raccoons is to shine a light on their den, dial in a talk radio station and play that near where the raccoon family is, or douse the area in an unpleasant scent. “She won’t want to raise her babies there anymore,” Kingshott says.

“Ideally, if you are able to give the mom raccoon time, her babies will be climbing and following her out of the den at around eight to 10 weeks of age,” she goes on to say. “Do not repair the entrance they are using until you are sure that they are all outside. Doing so will result in considerable damage from the mother trying to get in and possibly a slow, inhumane death for her young.”

“It’s actually an easier way of getting her to move and you’re not orphaning the babies at the same time,” she says of the suggestions.