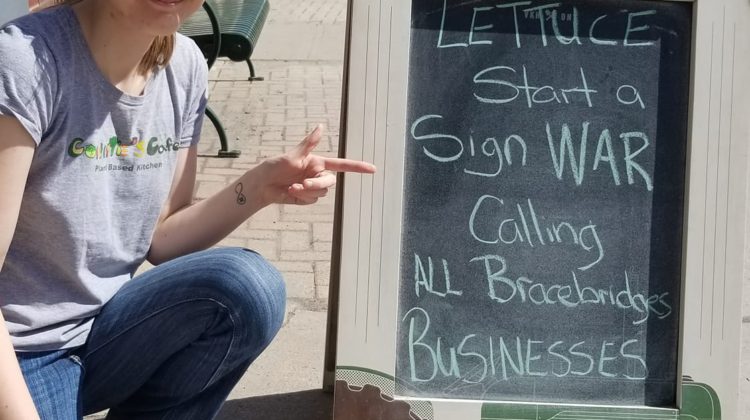 It’s a trend that is sweeping across Ontario: sign wars.

Businesses across the province have been using their signage as a way to cleverly and humorously call out other businesses. The trend was kick-started by a handful of businesses in Listowel, Ontario, and thanks to Connie MacNeil, who owns Bracebridge’s Connie’s Cafe, it’s made its way to our neck of the woods.

“I like to look at funny and happy things on social media and I came across something called ‘sign war,'” she explains. 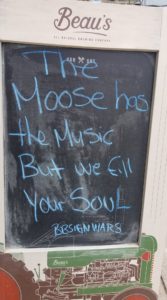 MacNeil is using the sign in front of her shop to call 99.5 Moose FM out saying, “The Moose has the music, but we fill your soul.” In the early stages of what has been dubbed the “#bbsignwar” on social media, two other Bracebridge businesses have joined in. The Pedicure Room wrote, “Hey Connie’s Cafe, it’s all fun and games until someone breaks a nail!” and were joined soon after by The Healing Room Muskoka with a sign that reads, “Your root chakra is red, your throat chakra is blue, we’re in on this sign war too.”

The sign was used by MacNeil as a way to announce that her cafe is open after being closed for all of April. “I thought let’s do something and have some fun and spread some cheer,” she says. MacNeil adds that she hopes other closed businesses take part. “Just to let people know we’re still around,” she says. If this catches on in Bracebridge, MacNeil thinks it will be great for the town’s businesses.

The reaction from the community since the challenge was posted on Facebook has been unanimous: you’re on! “People seem to be really excited for it,” she says, adding it’s been great seeing everyone come together and laugh at the clever signs.

MacNeil opened her cafe in June 2020, right as the COVID-19 pandemic was starting. “It’s been tough,” she says. “We are surviving, but just surviving.”

With vaccines now being shipped to Muskoka and throughout Canada, MacNeil is hopeful we will start to see restrictions lifted once it’s safe to do so. For now, though, she says she wants to see this trend spread throughout the town in hopes it makes people smile and helps local businesses recover.

“I think it would just be fantastic that no matter where you go in Bracebridge you see these signs having fun with each other,” MacNeil says. “Instead of people talking about the negative part of (the pandemic), it’s nice to see people come out with a positive outlook.”