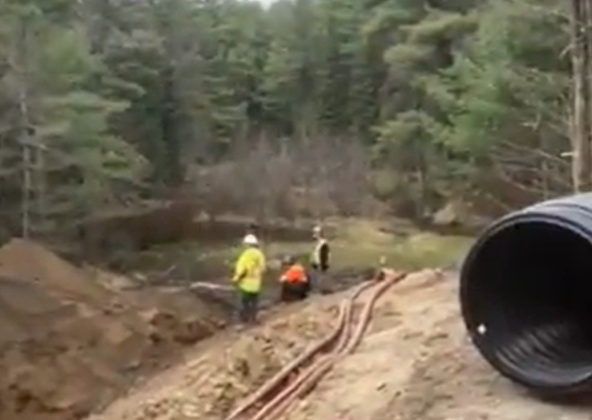 The work on Stephenson Road 2 will be wrapped up by Tuesday at the latest, according to Huntsville's Director of Operations and Protective Services (Photo credit: @townhuntsville on Twitter)

The work on Stephenson Road 2 in Huntsville is almost done.

The town’s Director of Operations and Protective Services Steve Hernen says the road could be reopened as early as Friday, but the rain our region got this week might cause the work wrapping up to be delayed until Tuesday at the latest.

“We had a culvert down here over the winter that failed,” Hernen explained in his weekly town operations update. A contractor has been brought in to replace the three-foot culvert. In the video, you can see the road has been torn up and the culvert has been put in position to be installed. The work has been ongoing since Monday.

Hernen added in the video that he hopes to be able to share plans for the road work that will be undertaken this year in Huntsville. He didn’t give specific details but did say to keep an eye on the town’s Twitter for updates.

It was also noted that half-load restrictions have been lifted in Huntsville, but still remain in other parts of Muskoka. A map has been set up on the District’s website with what roads do or don’t have restrictions in place.