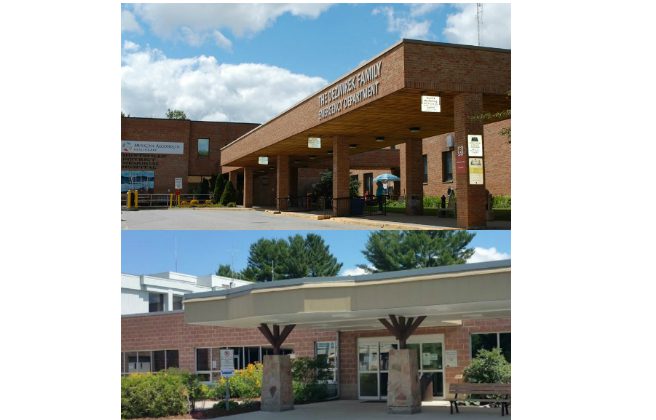 File images of both hospitals in Huntsville and Bracebridge. (MAHC website photos)

Hospitals in Bracebridge and Huntsville are doing well capacity wise according to the CEO of Muskoka Algonquin Healthcare.

In a call with the My Muskoka Now Newsroom, Natalie Bubela said the South Muskoka Memorial and Huntsville Hospitals’ emergency departments are well-managing the volume of patients coming through.

Bubela said what’s new this month is a directive from Ontario Health that was received on April 8th to stop all non-urgent and elective surgeries.

As a result of that, Bubela confirmed that on Monday, April 12th both hospitals did stop performing elective and non-urgent surgery and only began to do urgent and emergent procedures as well as cancer surgery.

She said the decision around who has surgery and who does not have surgery is still left in the hands of the physician.

“So the surgeon doing the procedure is the one that makes the decision as to who will continue to have or not have surgery and the hospital is not involved in any way,” said Bubela.

“What is different now is that we would have been doing those emergency, urgent and elective surgeries (so things that didn’t need to be done immediately but needed to be done in the foreseeable future). It’s those cases now that are being paused,” she explained.

Examples of elective and non-urgent procedures include cataract surgery that isn’t urgent, endoscopies that are not urgent and can wait another couple of months.

However, Bubela stressed that none of this would affect those coming into the emergency room and hopes that the province’s decision to pause these types of procedures and surgeries will not negatively impact people from coming to the hospital when they need care.

She finished by saying “I strongly encourage people that feel that they need to come to an emergency department to not be afraid and come to us because we are here to look after them.”