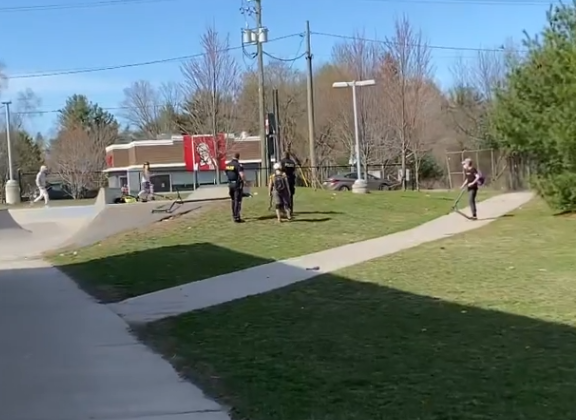 A screencapture of the video (Photo credit: @brodieohare on Instagram)

“It’s certainly concerning,” Gravenhurst Mayor Paul Kelly says of the controversial video circulating on social media of a confrontation between a Bracebridge OPP officer and a youth at a skatepark in Gravenhurst.

“There were signs that were posted, apparently, by staff saying that (the park) was closed, but apparently they got torn down,” he tells the MyMuskokaNow.com newsroom. Kelly says he was advised by a resident of the torn-down signs and later confirmed with Gravenhurst’s Public Works Department that they had put them up over the weekend. “I do believe there was probably some confusion,” he adds.

While he is interested to find out what happened before the camera started rolling, Kelly says it’s not up to him to pass judgement on what happened. He adds that he has been in contact with Inspector Mike Burton, who is the Bracebridge OPP Detachment Commander. “It’s a police matter,” Kelly says. “They will be dealing with it.”

Sergeant Jason Folz confirms that the Peel Regional Police have been brought in to help with the ongoing investigation. He adds that the officer involved has been reassigned to administrative duties.

Kelly is concerned about the often changing COVID-19 restrictions. “Throughout this pandemic, restrictions have been on and off again and on and off again and I know there’s frustration amongst most residents of Ontario,” he goes on to say. Kelly points out that last week it was announced that playgrounds and recreation facilities would be closed, but then the province backtracked over the weekend, which only made things more confusing. “Who knows,” Kelly says. “Maybe that will change in the coming days because of the concern expressed by people.”

Going forward, Kelly suggests better signage is needed to explain what is closed, adding that it wouldn’t hurt to make the signs more difficult to damage. He says the town does the best they can to ensure everyone has the latest information on what restrictions are in place, but it’s the province that creates the restrictions and has to make sure what’s put in place is clear.

Despite that, Kelly is frustrated because he thinks there will still be people who “disrespect” the requirements. “That’s part of the problem,” he says.

He also thinks that more thought needs to be put into how outdoor activities are handled. “I’m not an authority on it, but if I understand correctly, the incidences of COVID transmission have not been related to – for the most part – outdoor activities,” he says. There has already been pressure put on the provincial government to reconsider some restrictions and Kelly thinks the heat will continue to be turned up. “It’s been made loud and clear from many many people that (the province) needs to reconsider the outdoor activity part of the stay-at-home order.”