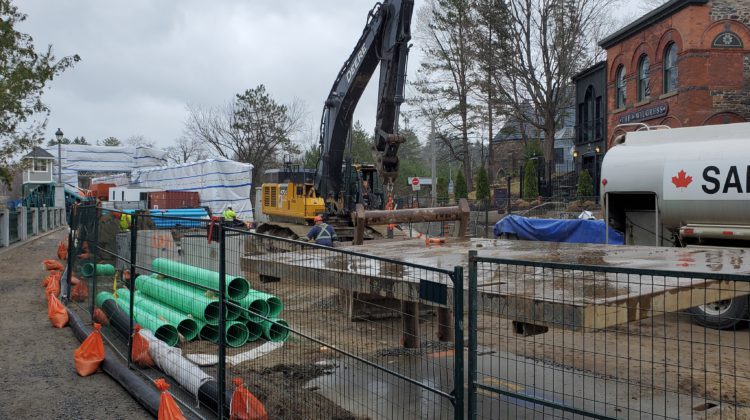 “Things are moving along well,” the Town of Huntsville’s Director of Operations and Protective Services Steve Hernen tells the MyMuskokaNow.com newsroom.

He says Dufferin Construction is “well into stage one” of the project. Hernen expects the first stage to be done by the end of May. The first part of the four-phase project is taking place from the Swing Bridge on Main Street to Lorne Street. The bridge is being upgraded and new underground water and sewer infrastructure is being replaced from Main Street to Brunel Road.


“The work on the bridge is progressing very well,” Hernen says, adding they are just about ready to start painting it. Meanwhile, the storm sewer along River Street is done and the construction crew is beginning to work further up Main Street.

While work only got underway a month ago, he says he is happy with the progress being made, adding they have not run into any major delays.

With the latest provincial lockdown causing some businesses to close their doors for the next month and forcing others to move to only allow curbside pick-up, Hernen says this is a good opportunity for workers to push forward.

“We’re now looking to see if there’s anything we can do to speed up the process while there are less people around,” he says.

On Wednesday, the town confirmed that it got the green light to move ahead and begin working in the passive zone from Brunel Road to West Street.

There will be no changes to detour routes or road closures. This passive area is currently used to store equipment, material, pipes and machinery but soon, sidewalks will be removed and crews will start diggin’ in Stage two.

The area where construction is being done has been closed off to vehicle traffic, but Hernen points out that the sidewalks have always and will continue to be open while work is ongoing, but adds that it wasn’t as busy downtown last week during the first week of the lockdown.

Downtown businesses are open and the town is making sure the community can access stores for curbside pick-up during the Provincial shutdown.

The second phase of the project is scheduled to start at the beginning of June. The work will be done between Brunel Road to Centre Street with King Street getting a facelift and the ramp at Town Hall repaired. Hernen explains the work that will be done will be mostly the same as what was done during the first phase, just one block over.

The original schedule for the four-phase project was for most of the work to finish up by November, with touch-up work done in the spring of 2022. “By the May long weekend (in 2022), the place will be 100-percent done,” Hernen says.