One Muskoka resident is cleaning up her community, one garbage bag at a time 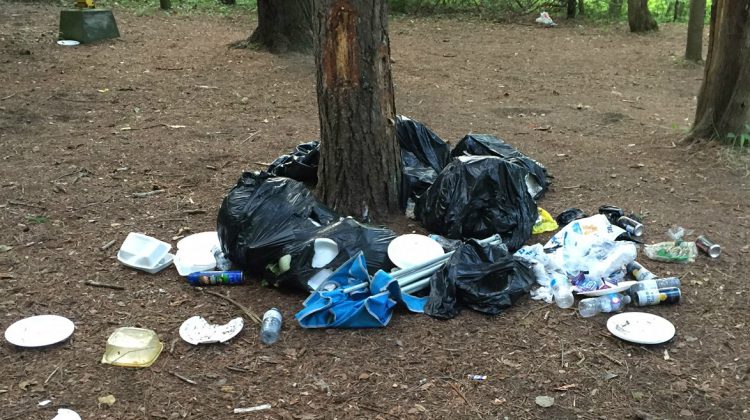 Springtime brings warm weather, but it also unearths the garbage that had been piled underneath the many snowbanks throughout Muskoka.

Celina Champagne and her husband noticed this on their weekend hiking trips and set out to clean up their community, one grocery bag at a time. “We noticed there’s always litter along the path,” she tells the MyMuskokaNow.com newsroom. Sometimes, she says they would even find litter hidden in bushes. “Eventually I just got tired of looking at it,” she says. Now, whenever she and her husband go for a hike, they take at least one plastic grocery bag to fill up with garbage, then they properly dispose of it.

The couple has been doing this for a few years now and Champagne says the spring is when the littering issue is at its worst.

Since getting a dog last summer, she says now she’s picking up garbage daily. “When she sniffs around, I would pick up the garbage,” she explains. The goal is to fill at least one grocery bag per outing, but recently she’s started bringing more than one because of quickly she fills them up.”I’d say it’s definitely getting worse,” she says about the amount of litter she sees. Champagne believes that the COVID-19 pandemic has heightened the problem. She has noticed that there are a lot of bins in town that have lids, which she thinks people are afraid to touch because of the virus. She says she’s noticed a lot of garbage laid right beside those bins.

Champagne says the idea hasn’t caught on yet with her family, friends or those in the community. “I don’t think many of them have wanted to participate in it,” she says of the family and friends she asked to help. She adds that if even one person decided to lend a hand, it would double their efforts. Champagne is hopeful that she does inspire someone to take part, even if they only do it once.

“They’re not taking responsibility for their trash,” Champagne says, adding it’s not hard to put your garbage where it belongs.

She suggests others take the time when they go for walks to bring a plastic bag with them and fill it up. “People will begin to notice after a short period of time that it looks cleaner and feels healthier,” Champagne says.