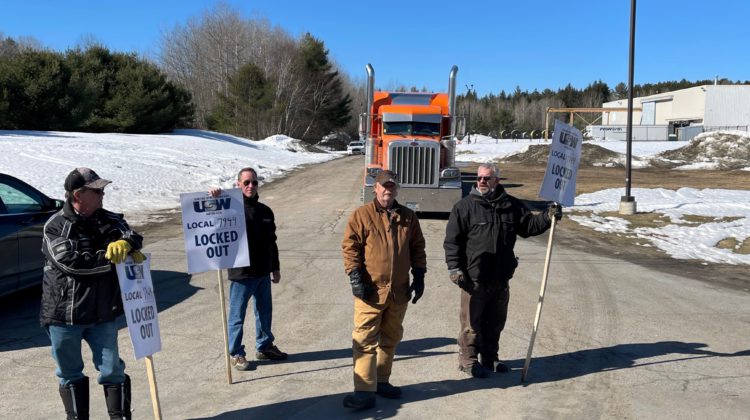 Picketters blocked trucks for 15 minutes over the weekend at the Fenner Dunlop facility in Bracebridge (Photo supplied by: Melissa Puccini-Lott)

The 60 locked-out workers with Fenner Dunlop’s Bracebridge facility are no closer to a new contract than they were just over a month ago when they started picketing.

United Steelworkers (USW) Local 7949 President Melissa Puccini-Lott says on March 20th and 21st, they found out that management was attempting to move product out of the local facility to other areas, including to Fenner’s sister plant in Port Clinton, Ohio. “We knew they were going to try to get some product out it’s just we didn’t know when and they caught us a little flat-footed,” she tells the MyMuskokaNow.com newsroom. “They had trucks come in when they knew we wouldn’t have the picket line manned.”

Puccini-Lott says the first two trucks left before they arrived, but the other three were held up for 15 minutes, which she notes is the longest they are legally allowed to hold them up. “We confirmed with the OPP last week that we’re able to do that,” he says. Puccini-Lott believes they were held up because they had to dig some of the belts and materials out of the snow. In total, five trucks arrived on Saturday with another eight showing up on Sunday.

Puccini-Lott says since they starting picketing over a month ago, the only contact they’ve had with management has been when they were falsely accused of using a port-a-potty on company property.

She told the MyMuskokaNow.com newsroom in February that the hold-up in the contract negotiations is the loss of short-term disability. Puccini-Lott explains they do not have a set number of days they can bank for when they need them. “The first two days we don’t get paid at all, then for two weeks we get paid at a hundred percent, then it goes down to a reduction of 75-percent,” she explains.

What management was proposing with their current deal was that employees be transferred to employment insurance. “They want the government to pay for it,” Puccini-Lott says.

She added that there was another “seven pages worth” of concessions management was asking for.

The MyMuskokaNow.com newsroom has reached out multiple times to Fenner Dunlop management, but they have not returned calls or emails.

Last week, she says the police were called by management five times. “We had vehicles parked on the side of the driveways, not blocking it, on the road allowance, and the security guard on Monday and Tuesday called the OPP,” Puccici-Lott says. She adds that when officers did arrive, they were told they weren’t doing anything wrong. “They’ve been keeping an eye on us,” Puccini-Lott says of the police.

Constable Samantha Bigley with the Bracebridge OPP says they have not gotten any calls regarding misconduct, only ones wanting clarification on where picketers are able to stand.

Puccini-Lott says an inspector with the Ministry of Labour was anonymously tipped off last week about possible unsafe use of the equipment at the plant. While she isn’t sure who did call, she says that they are concerned about what’s happening with the equipment since many of the employees that are the usual operators are picketing.

Ministry of Labour Spokesperson Kalem McSween says they were notified of a complaint on March 20th and the 21st. “It was reported there were complaints regarding improper/dangerous loading of trucks,” he explains. “A (Ministry of Labour, Training and Skills Development) inspector attended the scene on both days.”

McSween says both investigations are complete and no violations were found.

Puccini-Lott believes management will try to move more products this weekend. “I think they’re going to step it up even further,” she alleges.