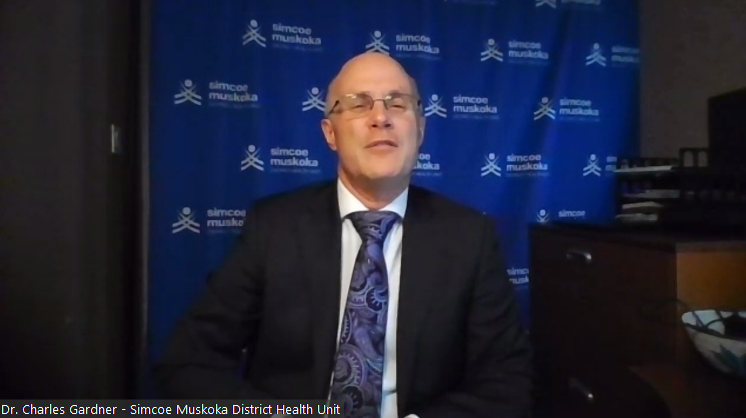 The Simcoe Muskoka District Health Unit’s (SMDHU) Medical Officer of Health Dr. Charles Gardner said Tuesday that 80-percent of residents in Simcoe Muskoka 75 or older have either booked a vaccination appointment or gotten the first dose of the COVID-19 vaccine.

He added that the “great majority” of people in long-term care homes have received at least one dose of the vaccine with 88-percent having both shots and 87-percent in retirement homes. Dr. Gardner reported that 63-percent of the other priority groups that are able to get the vaccine have gotten at least one dose. “We are making very good progress with the highest priority groups,” he said.

“We now have a new group and that is faith leaders who through their work have close contact with people with end of life care or pastoral care to vulnerable populations,” Dr. Gardner said. He added that more information will be sent out later in the week.

In total, 70,125 have been vaccinated in SMDHU’s medical region as of its Tuesday afternoon update. Dr. Gardner added that includes 17,285 people who are fully vaccinated.

Health Unit officials announced earlier this month that if you got your first dose of the COVID-19 vaccine before March 10th, you will have to wait up to four months before getting your second shot. “This is to allow us to get to more people quickly to get them their first dose,” Dr. Gardner explained.

With Ontario’s COVID-19 science advisory table reporting the province is in a third wave, Dr. Garnder touched on what could happen with future lockdowns. “I am concerned that having to go into more stringent controls or a lockdown would be opposed,” Dr. Gardner said. “It would be very difficult to sustain.”

The last time SMDHU’s medical region was moved to the Grey-Lockdown zone was February 26th and it only lasted a week. Dr. Gardner cited new data showing that there were a total of 265 cases last week, compared to the 300 from the week before. He explained that any new cases that happened during the week our region was in lockdown would appear on last week’s update. While he didn’t go as far as saying it was all because of the lockdown, he said the lower numbers could “possibly” be attributed to it.

With that being said, he said he understands how hard lockdowns are on people, adding he’s concerned with people being “exhausted” of control measures. “The saving grace to the situation is that at least we’ve provided a high degree of protection for those most vulnerable with vaccination in our long-term care and retirement homes and other vulnerable seniors in the community,” he said.

Dr. Gardner said that he’s concerned a third wave will be “very challenging” to handle.