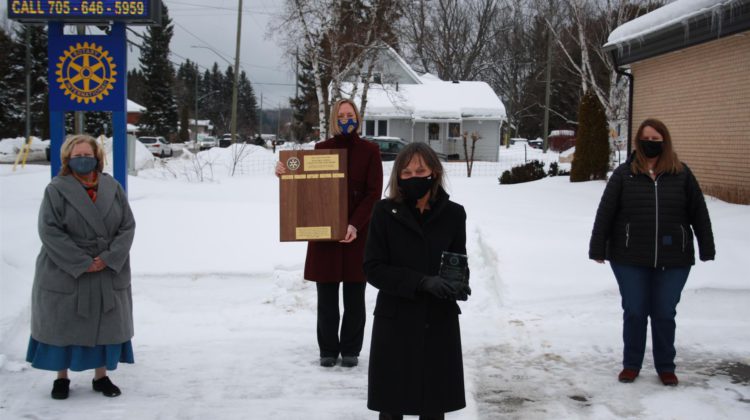 Evelyn Archibald has been named by the Bracebridge Rotary Club as its Citizen of the Year.

Rhodes says Archibald has spent time working with the Muskoka Women’s Advocacy Group, the Muskoka Community Foundation, Canadian Federation of University Women Muskoka, and has helped Habitat for Humanity Muskoka with its various builds in the District. “The list is on-going,” Rhodes says of Archibald’s achievements.
This year the award’s name was changed to honour William “Bill” Towns who passed away in 2020. “William E. Towns was the epitome of exemplary civic duty and of selfless volunteer service, and the award renaming is very suitable because he set the bar very high,” Committee Chair Cheryl Kelly says.
“It’s really an honour,” Archibald tells the MyMuskokaNow.com newsroom. She adds that she’s proud to be named as the first recipient of the newly named award. “It’s also really humbling,” she goes on to say. She says there are so many others that are avid volunteers like herself. “Bracebridge is a great community for people volunteering and contributing,” Archibald says. She adds that she’s just fortunate to continues to be asked to volunteer.
Rhodes says she’s gone “above and beyond” to support Bracebridge. “She’s just always rolling up her sleeves and she’s doing an awesome job in our community,” she says. “She’s just a wonderful woman.”

Last year’s Citizen of the Year was Mayor of Bracebridge Graydon Smith.