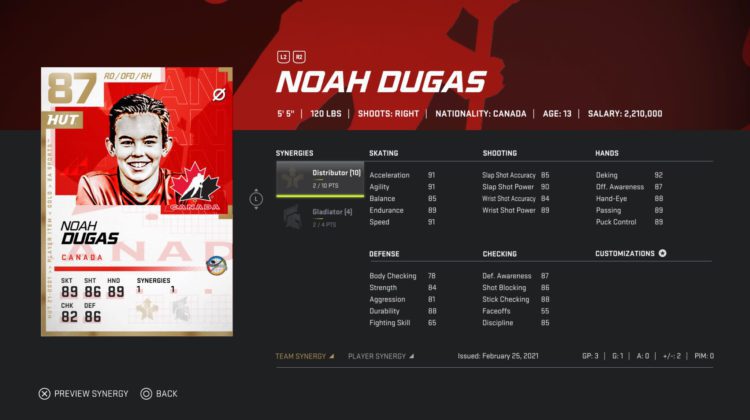 Noah Dugas, a North Bay Trapper who passed away in the fall, is now playable in the NHL 21 video game.

A handful of “Hockey Ultimate Team” cards have been made available to friends and family of Dugas, allowing the 13-year-old to play alongside the NHL stars he looked up to.

“I thought it was a great idea, especially with all his teammates and cousins, they play all those games,” said Glen Gravelle, Dugas’ uncle.

Gravelle and friend Jason Sullivan brought the idea of honouring Dugas to EA Sports shortly after his passing in November.

Sullivan, who had prior experience with EA Sports’ outreach program, thought it would be the perfect opportunity to remember Dugas.

“I just saw how his impact was throughout the community with everybody. I got thinking, this could be a great opportunity to call in a favour,” Sullivan said.

From there, Sullivan reached out to Gravelle, who began working with EA Sports to determine what type of player Dugas would be in the game.

Noah’s height, weight, strengths and weaknesses are all included in his playable character, which was made available on Thursday.

Gravelle says the family held a call while they tested Dugas’ character in the game.

“It’s pretty overwhelming to see number 71, Dugas on the back of his jersey skating down the ice. It’s pretty special,” Gravelle said.

Sullivan, who was given one of the 25 Dugas cards made available, said he was quick to test out his latest player.

“When I saw it last night, I jumped on PlayStation right away and the first game I played with him, he scored a goal,” he said.

“Being able to see Noah out there playing the game he loved was pretty touching,” noted Gravelle. “He would have been pretty proud to see himself playing with all those superstars.”