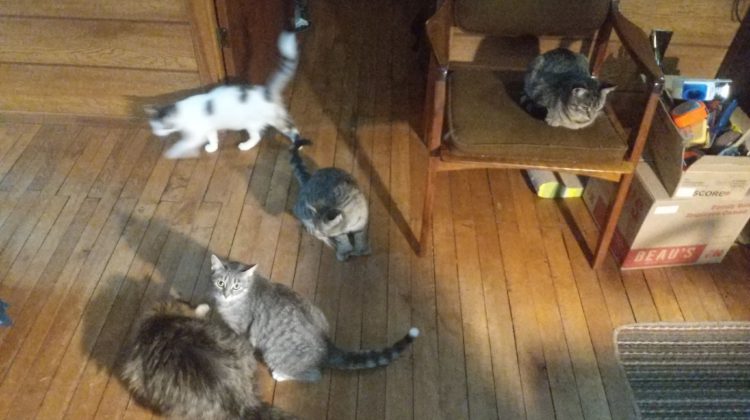 Heather Deveaux and her partner Kyal started out feeding the odd stray cat that would stop by their home in Dorset, but word spread amongst the other feral cats in the neighbourhood and soon more and more felines in need began showing up at their doorstep.

“This was all while I was working full time,” she tells the MyMuskokaNow.com newsroom. She says everything she was doing – veterinary bills included – was being done with her own money. Deveaux says she would make shelters for the cats so they would have somewhere warm to be in the winter. “Slowly over time more and more would come and hang out here and be cared for,” she says.

COVID-19 made things more difficult for Deveaux. She had left her full-time job in hopes of starting her own business. With restrictions being put in place because of the virus, she put that dream on the backburner. “So I continued working in our garden and hanging out with cats,” she says. More cats started showing up, including two mother cats with four kittens each. “We started taking them to the vet to have them spayed or neutered, which isn’t an inexpensive enterprise,” she says while laughing, adding it was then when she realized she couldn’t keep doing this for much longer.

Deveaux put up a GoFundMe to help cover the costs and she says people “jumped at the chance” to help. Since then a Facebook page has been set-up with hundreds of people helping to support her and the cats she brings in. She has since incorporated herself and become a not-for-profit to make it easier for people to donate.

“We have an enormous community of these amazing people,” she says of the many people that follow her on Facebook. “If I put a call out saying I have vet bills of X number of dollars, donations start rolling in.”

When she does bring in new cats, Deveaux says she keeps them separated at first to make sure they’re okay. “We take them to a vet as soon as we can,” she adds. Once they pass the initial test, Deveaux makes sure to socialize the new cats with the older ones. “They’re usually so freaked out at first they hide in the back (of the crate),” she says. After watching her play with the other cats and realizing she isn’t going to hurt them, she says the new ones usually warm up to her and their surroundings. “I also try to pet them as soon as it’s possible,” Deveaux adds. “Sometimes through the bars of the crate.”

As her cat rescuing program continues to grow, she says she needs more help. “Mostly we need foster homes,” she says. Deveaux adds even if you haven’t lived with a feral cat, she and her partner will train you and support you. “We try to match the foster and the animal and then you become the expert on that cat,” Deveaux explains. She’s also looking for cat companions that will help manage the cats she already has. The idea is to make the rescue space as “homey” as possible, so the more hands to care for the cats the better.

“People have a perception that cats are less friendly,” she says. In her experience, though, that’s not the case. “I know that feral cats can be fearful – that’s what feral really means – so they do lash out if they’re afraid,” she explains. Deveaux says while some cats take time to warm up to her, most of the time it only takes a day or two for them to brighten up. She says usually they’re just happy to be inside and to have food.

“This is a large and growing problem so awareness is key,” Deveaux says.