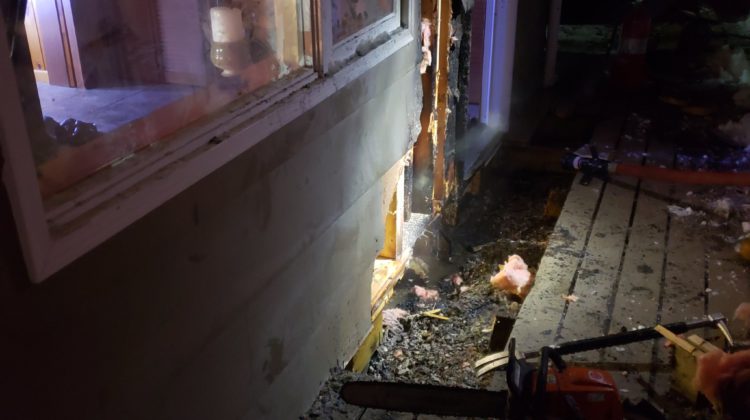 Where the fire originated at the home on Brackenrig Road (Photo credit: @MuskokaLakesFD on Twitter)

The Muskoka Lakes Fire Department estimates $30,000 of damage was done after an early morning fire on Brackenrig Road in Port Carling.

Fire Chief Ryan Murrell says they arrived just after 1 AM. “Upon arrival, crews found that there was a back wall at the back of the property that was on fire,” he explains. “It appeared the fire started somewhere on the deck.”

He says both occupants got out safely and were fighting the fire with pails of water and a fire extinguisher when firefighters arrived. “It appeared like they were making good headway,” Murrell adds. Once the department arrived, he said they took over the battle. Murrell says they took apart the deck to get it away from the building and prevent the fire from spreading.

While they won’t be able to determine exactly how it started due to ripping apart the deck, Murrell says he’s “pretty certain” it was discarded ashes from a wood stove that were put in a mental can. He says the occupants told firefighters they have done that on “numerous occasions” with no incident. Murrell says a spark from the pail “more than likely” ignited the wall or floorboards.

Murrell says that when you’re disposing of ashes, you need to put them in a metal can with a lid and make sure you leave them away from your home and other flammable items. He adds that you should make sure it’s emptied out once the ashes cool off.