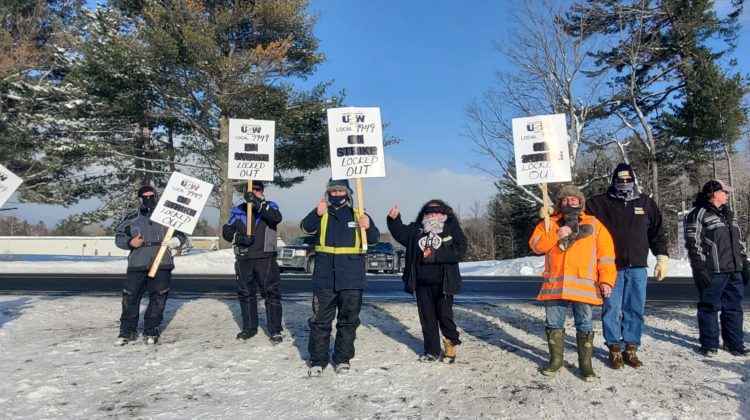 Fenner Dunlop employees have been picketing in front of the building on 700 Ecclestone Drive since being locked out Friday (Photo credit: Mathew Reisler)

Fenner Dunlop’s 60 Bracebridge employees represented by the United Steelworkers (USW) Local 7949 have been locked out after contract negotiations broke down.

Union President Melissa Puccini-Lott says since new management was installed in 2011 they have been “chipping away” at morale, but recently it’s “gone off a steep cliff.”

“We’ve been told on several occasions over the last eight years to just be happy you have a job,” she adds.

USW Staff Representative Dale Hogg says employees were locked out on Friday hours after a Ministry of Labour-sponsored vote ended with 79-percent of the 60 workers represented by the USW Local rejecting the latest contract offer.

The hold up in the contract negotiations is the loss of short-term disability. Puccini-Lott explains they do not have a set number of days they can bank for when they need them. “The first two days we don’t get paid at all, then for two weeks we get paid at a hundred percent, then it goes down to a reduction of 75-percent,” she explains. What management was proposing with their current deal was that employees be transferred to employment insurance. “They want the government to pay for it,” Puccini-Lott says.

“There were seven pages worth,” she says of the other concessions being asked for by management. Puccini-Lott says they have taken some, but the company didn’t budge from their position.

This is the third contract in a row that short-term disabilities have been “attacked” she says.

If they did sign the new contract, it would have been good for the next five years. Puccini-Lott says the past two contracts have been three-year terms. “They said they wanted more stability,” she explains, adding they also signed a five-year deal in 2006 for the same reason.

Puccini-Lott says the last time they were at the negotiating table, it was “contentious.” She says the union filed for no-board and had a strike mandate in place. “At that time we went back to the table with a mediator and we struck a deal,” she adds.

Hogg says they have yet to hear from management. “The lawyer contacted us with the notification right after the board did their vote (on Friday) and they turned around and immediately did the lockout,” he says.

“They are holding strong,” he says of the employees. “As for now, we’re out on the street until such time as the company approaches us to go back into talks.”

Hogg, Puccini-Lott and the employees at Fenner Dunlop in Bracebridge have been picketing at the building on 700 Ecclestone Drive since they were locked out.

The MyMuskokaNow.com newsroom will be reaching out to Fenner Dunlop on Tuesday for a comment on the situation.