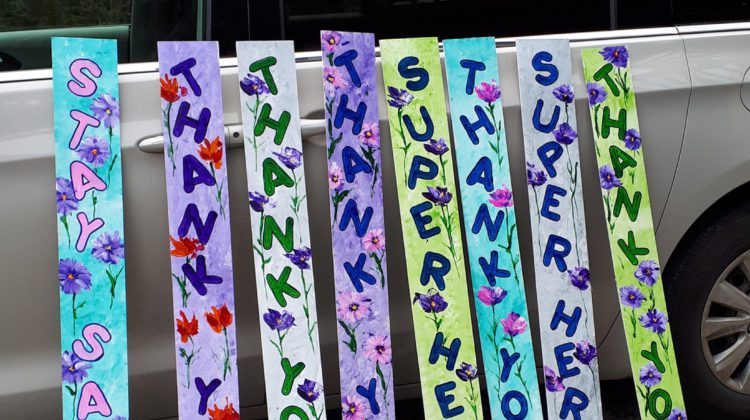 Sherry Beiers wasn’t able to see her Mom who is living at the Muskoka Shores long-term care home so she set out to figure out how to tell her she’s thinking of her – and it snowballed from there.

“My intention was to say thank you to the staff at Muskoka Shores,” she explains. Beiers says she saw online other people making signs as a way to show their appreciation while still obeying COVID-19 protocols. She made a sign that said “thank you” on one side and “we love you Mom” on the other.

Before going to the long-term care home to put the sign up, she called to make sure she was allowed to do it. Beiers says the staff were more than happy to accommodate her and even took pictures of her Mom with the sign. “The staff were so appreciative of the thank you signs, I thought I’ve got to do more,” she says. So Beiers got to work creating a makeshift sign assembly line. She laughs when she says there were “too many people to thank” so she needed to make sure she was organized.

While the idea behind the signs was to show her appreciation for essential workers, Beiers says it was “good therapy” for her to make the signs.

When it was all said and done, she made 25 signs for 14 locations around Muskoka. She says she put ones up to honour the first responders, police, at a few pharmacies in town, grocery stores and the South Muskoka Memorial Hospital in Bracebridge. She put these signs up to surprise the workers so at some places she says she had to guess where the staff were coming in so she put up multiple signs at one location.

She’s no longer making signs because she’s run out of materials.

“I’m so thankful for everyone being out there,” she says. All she wanted to do was to “brighten someone’s day” Beiers adds.