Bracebridge OPP kept busy on the snowmobile trails over the weekend 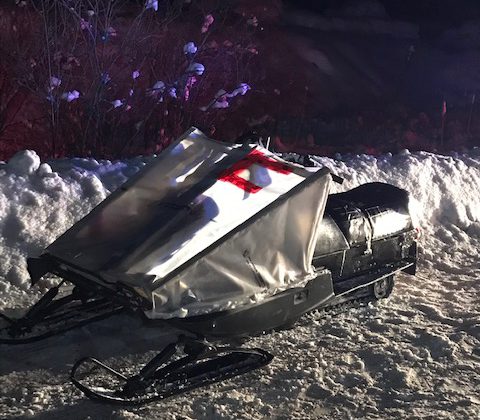 Two snowmobilers without proper permits were caught on the trails in Gravenhurst over the weekend, including one person who was driving a homemade sled.

The OPP report the two riders were found riding through Gravenhurst on Sunday at 4 AM. Officers were able to stop one of the snow machines, but the other rider fled the scene.

The first driver was in a snowmobile with a front cowling made of wood and weather stripping and had no lights in the front or back. The 33-year-old driver from Gravenhurst was charged with failing to have working head or rear lights, driving a motorized snow vehicle with permit not issued and with no insurance, failing to display registration and failing to display evidence of a permit.

The homemade sled was also impounded.

The second sledder was found a few hours later. Officers were in the area where the initial stop happened and found the second snowmobile flipped upside down in the ditch. After a short search, officers found the rider.

A 22-year-old from Gravenhurst was charged with not identifying himself to police, driving with no license, failing to report the circumstance of a collision, driving a snowmobile without a permit and failing to display evidence of having one and driving with no insurance.

The OPP reminds all riders that if you’re going out on the trails, you need to wear a helmet, have proper insurance and meet all operational requirements.