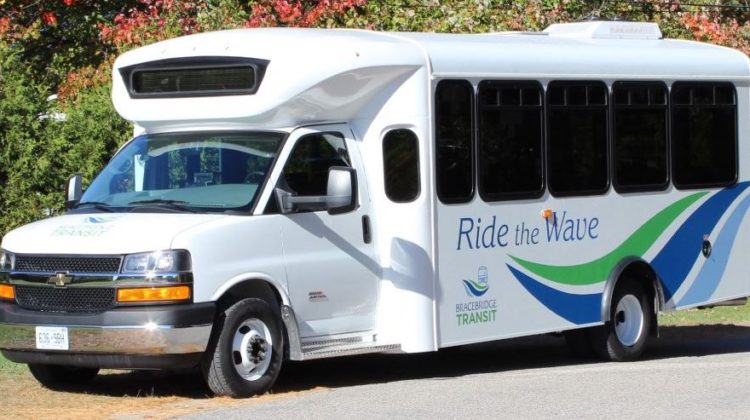 Despite the COVID-19 pandemic, Bracebridge Transit and Mobility are continuing to grow – and Bracebridge’s Deputy Mayor Rick Maloney wants that to continue heading into 2021.

“One of the things I’ve always professed when it comes to transit is you need to crawl before you walk and walk before you run,” he tells the MyMuskokaNow.com newsroom.

Since starting the program in 2016, Maloney says they have seen growth every year leading up to January 2020. “By the end of last year we were up to 2,400 riders per month,” he says. “Of course COVID has had some impacts on ridership.”

It’s Maloney’s hope that the transit system expands from its current one bus, one route system. “We have a consultant working on a report that will be received by council in the new year,” he explains. It stems from a survey that was put out by the town in November looking to find out what the public’s opinion is on Bracebridge Transit and Mobility. He says that the survey will help them work on a five-year plan as well.

“At the end of the day we will find that people will be anxious to get back to a sense of normalcy,” he says of the soon-to-be-released report. Maloney believes a key aspect in that will be keeping the transit system running. With that being said, he says it will be important to keep riders’ safety top of mind.

Because of the pandemic, the town has asked that the system be only used for essential trips and a limit of 8 riders is in place as well. “This is a bus that would normally carry up to 24 passengers,” Maloney says. “Our goal is two things: the safety of our passengers and to ensure we’re compliant with the direction of the province of Ontario and the Simcoe Muskoka District Health Unit.”

Bracebridge’s Hammond Transportation has been the service provider for the transit system since it launched in 2016.

“The service has become more fine-tuned in that period and I think more and more people are taking advantage of it as a result,” Hammond’s Director of Operations Scott Hammond explains. The buses are sanitized every morning and evening and Hammond says drivers clean off the frequent “touch-points” as well throughout the day. “Drivers are instructed to manage the number of people on the bus,” he adds. Hammond says that served as a “learning curve” for drivers and riders, but they have worked through it.

“For the most part, there have been no issues with ridership,” he says. “They understand, they get it.”

Bus fares have been waived as well. Maloney says that hasn’t made a significant dent in funding. He explains a “large portion” of funding comes from federal and provincial gas tax rebates. “That has been continuing,” he says.

Going forward, Hammond says he thinks public transit “across the province” will be following different guidelines once the pandemic ends. “I don’t know how long masks will stay in place or how long drivers will be separated from passengers or no-touch fares,” he adds. “Those things are all possibilities to continue on.” Hammond says they have the infrastructure necessary to continue doing that extra work. He says it only makes things better for passengers if buses are kept clean.