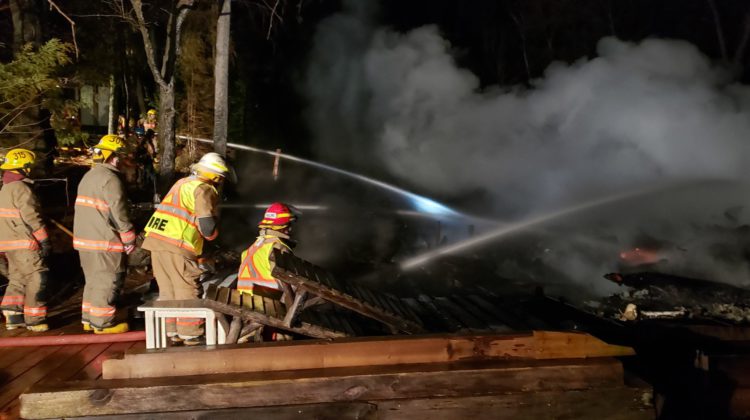 15 firefighters fought the blaze from 10:30 PM Thursday until 3:30 the next morning (Photo credit: Muskoka Lakes FD on Twitter)

A fire in the Township of Muskoka Lakes is still under investigation.

The Muskoka Lakes Fire Department was called to a fire on Thursday night shortly after 10:00.

“Firefighters from three stations responded,” Muskoka Lakes’ Fire Chief Ryan Murrell tells the MyMuskokaNow.com newsroom. He says 15 of them showed up from the Bala, Torrance, and Walker’s Point Fire Halls.

“The structure was hard to locate,” he explains. Murrell says the person who reported the fire wasn’t at the home so the exact location wasn’t known right away. “It took about 10 to 15 minutes to find it,” he says. “Then when we did locate it, there was some information that led us to believe it was only accessible by water.” Murrell says they called the Milford Bay station to attempt to get to the fire by boat. Eventually, they did get to the fire using an ATV trail.

“This is exactly why we want people to have working alarms and have caretakers watching their property,” Murrell says. He adds that by the time the first responders arrived, the building had collapsed.

“If they had an alarm system, we would have gotten warnings and could have saved the structure,” he says.