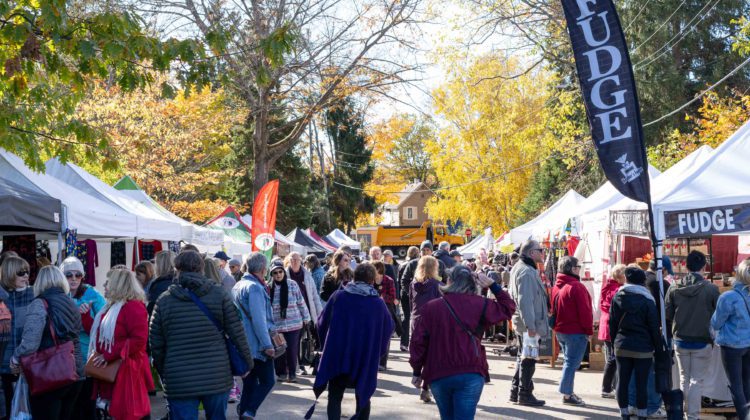 The 2019 edition of the Bala Cranberry Festival brought thousands of people to the Muskokas (Photo credit: Jordan Mulligan)

The Bala Cranberry Festival was cancelled earlier this year, but organizers are calling on locals to make the trip to the township – and travel throughout the region – to support local businesses.

With the annual event cancelled this year, festival’s Officer Manager Tania Cowley and the organizers are calling for locals to travel through the Muskoka area throughout harvest season – not just during the three days the event would have been held. Cowley says businesses in Bala are still open, but some are operating on appointments only.

“For many businesses, it’s their biggest weekend of the year,” she says. Cowley points out that the festival consistently brings in 20,000 or more people during the three days it’s held. On top of that, the Tourism Industry Association of Ontario says that those visitors spend over $1 million. “These are sales that boost (businesses) to help them make it through the quieter winter months,” Cowley tells the MyMuskokaNow.com newsroom.

Money is also raised during the festival that goes to support community groups. Cowley says they are fundraising this year, but the money will go to support the festival who she says has overhead costs that need to be covered. “We had to shift focus to make sure we’re financially stable to continue with our missions of providing an extension to tourism season and community funding,” she says. “Even though the festival isn’t happening, there were still overhead costs before March.”

Part of the fundraising campaign this year is the 2020 Bala Cranberry Festival button. Cowley says they designed it with positive messaging in mind which is why “we’ll be back” is written across it. You can buy one for $5 through the festival’s website.

In recent years, the annual fundraising total has been topping $40,000.

Cowley says if there’s extra money left over once the festival’s overhead costs are covered it will go to yet to be determined community groups.