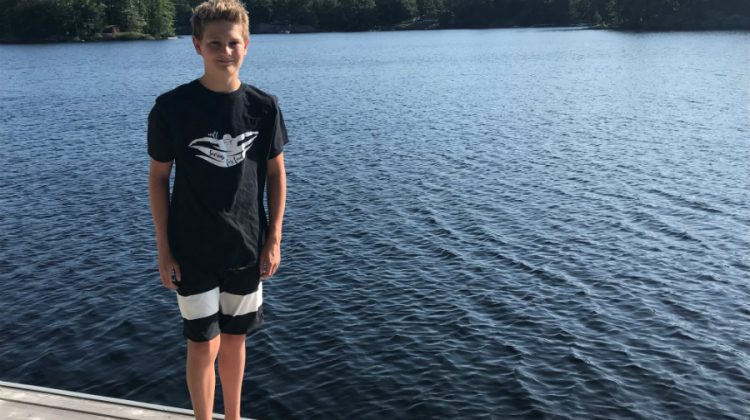 Samuel Wood raised $2,290 this year during his 'Swim For Food' Initiative. (Supplied by Christine Hann)

A 15-year-old seasonal Gravenhurst resident is expressing his gratitude to the community after spending a month raising donations for the Manna Food Bank.

Samuel Wood’s ‘Swim For Food’ Initiative saw him swim for one kilometre per day in Muldrew Lake for 30 straight days from July 17-August 15 – while raising awareness for the need for year-round food donations.

In an interview with MyMuskokaNow, Wood says after accumulating the total donations – they actually exceeded their goal of $1500.

“We surpassed that by quite a bit and actually raised $2,290, as well as several boxes of food for the Manna Food Bank; I was so amazed I could barely speak by generosity of our neighbours and everyone in Muskoka who donated. It was just amazing.”

Two summers ago, Samuel joined the Will Swim for Food campaign – joining 11 other kids – who swam five kilometres a day for a whole week while raising food donations.

This year was his first year swimming solo.

“It was hard at times. The one kilometre per day, I could take my time with that but just the idea of jumping into the water for 30 straight days – because there are some days you really just don’t want to do it – I would say commitment was the hardest part.”

Wood says he’s extremely appreciative of all those who supported him over the past month.

He also notes that given COVID-19 and the uncertain times we’re facing, it was important for him personally, to be able to give back to the community he considers a second home.

“It just means so much,” he added.  “I feel so extremely lucky to be able to spend my summers and almost all year up here in Muskoka, and to be able to give back means a lot.”