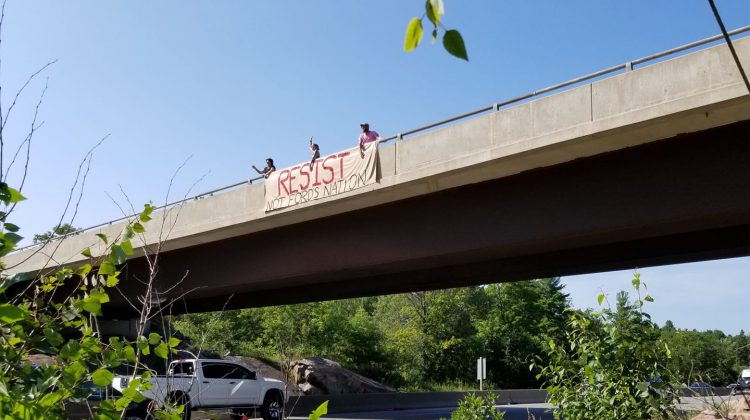 A banner similar to this one will be hung at Rainbow Circle to show support for Six Nations. (Muskoka Power of Many Facebook page.)

A group of Muskoka locals are showing solidarity with Indigenous land defenders at Six Nations who are occupying the disputed lot near Caledonia.

In a statement sent to MyMuskokaNow, later today, the group of locals will be hanging banners off of Rainbow Circle overpass on Highway 11 in support of those defenders who inhabit the area now known as 1492 Landback Lane.

According to the statement, the plot of land was sold without consent from the community under the authority of the Six Nations band council.

The band council was developed under the Indian Act for the purpose of undermining the traditional Haudenosaunee governance.

In their most recent election, the council only 4 percent received voter turnout.

“Foxgate development, when purchasing the land, also knew that this land sale would likely be non-consensual for the Six Nations people, and wrote clauses into their contract that attempted to discourage protest,” the statement said.

The situation at the lot is a continuation of unlawful sales of sections of the Haldimond Tract, a land piece 10 kilometres deep on either side of the Grand River, initially granted to the Haudenosaunee confederacy in 1784.

The statement continues that it is also a contributing factor to coercive seizures of Indigenous lands that have resulted in Indigenous peoples now owning only 0.35 percent of the total landmass in Canada.

“Yet even still their reservations continue to be encroached upon, as we can see in the attempted development of pipelines on unceded Wet ‘suwet’ en territory in BC, and other presently unresolved land disputes with Six Nations. As allies, we are responding with messages of solidarity for the people of Six Nations.”

The group says they feel it’s important that Ontarians know there is vocal support for Indigenous land sovereignty even in small communities.

The week following this drop, these banners will be taken to Caledonia and displayed on the land.