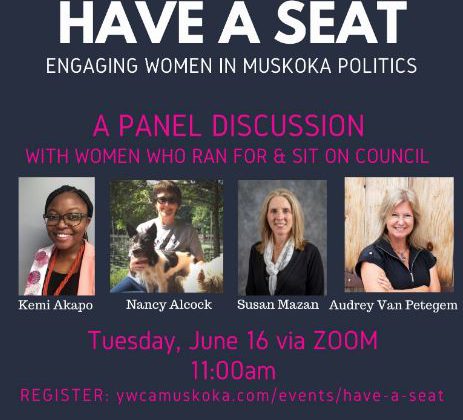 YWCA Muskoka is looking to get local women more engaged in municipal politics.

The organization is hosting a live online panel next week that will give residents an opportunity to hear from women in politics from across the region.

The Have a Seat panel will include four municipal leaders who will shed light on their experiences, challenges and insights on running an electoral campaign.

In an interview with MyMuskokaNow, Executive Director for YWCA Muskoka Hannah Lin says they are looking to highlight why it’s important to have women around the decision-making table.

“We’re pretty excited to have all four of these women share their experience of what it is like to run, what kind of barriers they faced and how they handled them, and what it’s like to be involved in municipal politics.”

Speakers for the panel will include Deputy Mayor of Huntsville Nancy Alcock, Muskoka Lakes Township Councillor Susan Mazan, councillor for the City of Peterborough Kemi Akapo and Audrey Van Petegem, a candidate in the most recent election in Gravenhurst and Muskoka entrepreneur.

Lin notes this is part of a national effort to get more women engaged at the local level.

“Whether it’s people of colour or different genders, not at a table or not sharing their voices, then there is a different dynamic in the power and decisions that get made. It’s overall, but we are one of several community groups doing a project like this through the Spring and Summer.”

Currently, in Muskoka, there are 52 municipal councillors – with only 16 women among them.

Lin adds that she feels if you really want change you have to hear from a more diverse range of people.

“Women certainly, I believe, face many barriers to getting involved in public life. Sometimes, it’s the distribution of responsibilities, or they’re balancing childcare – which shouldn’t be a women’s issue, it should be a peoples’ issue – but it does often fall to women.”

The event will be held in a ZOOM setting and takes place next Tuesday, starting at 11 a.m.

To register for this event, head here.