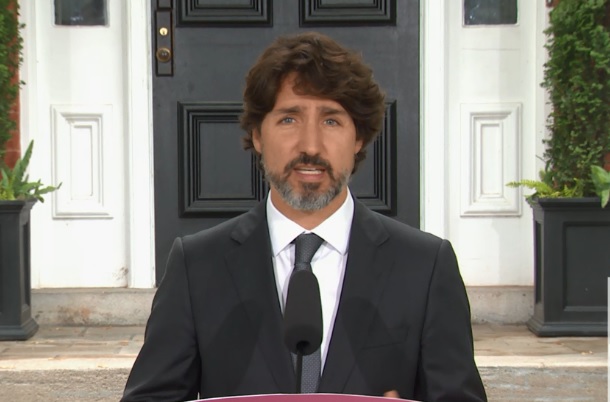 This morning opposition party leaders criticized the Trudeau government’s decision to punish those who are wrongfully taking advantage of the Canada Emergency Response Benefit.

In his daily address, the Prime Minister was asked about the criticism to which he said his government is not looking at punishing people who made honest mistakes. Justin Trudeau says this is a “time for us to pull together” as one country but unfortunately in every situation, there are “a few criminals” who will deliberately try to take advantage of a moment of solidarity, something he says will be punished accordingly.

And in response to calls for a fiscal update from the opposition, Trudeau said the challenge with fiscal updates is providing one that accurately predicts what things are going to look like for the rest of the year, and for the coming years, something made extremely difficult given the pandemic. He says his government has continued to demonstrate openness and transparency on all the measures put forward and has answered questions on all of them both from the opposition and the media.

Trudeau also confirmed the federal government just signed two new contracts to ensure Canadian frontline workers can continue to do their jobs safely. He said Quebec based Joseph Ribkoff Clothing Manufacturing will be providing 1.2-million Made in Canada medical gowns with deliveries starting in July. Trudeau says Brampton based medical supply distributor the Stevens Company will also be supplying 15-million shoe covers as well as 5-million disinfectant wipes all made in Canada. He said a ship carrying 160,000 litres of hand sanitizer arrived in Vancouver on Saturday, with seven more sanitizer-filled ships set to arrive in the next few days.

Trudeau says Canada has almost a million shipments of face shields and more than 7-million pairs of gloves on their way to the provinces and territories.  To connect businesses looking for PPE with suppliers he announced the launch of a PPE supply hub website.